Just recently we moved home and of course we had to look for an another Internet Service Provider. Due to coronavirus outbreak we could not install Vodafone. We had it previously and generally it was quite reliable and service was decent. Instead we stick to the only option - Virgin Media

When I signed up I was promised free setup and activation . Shortly after I signed up I've got this email confirming that: 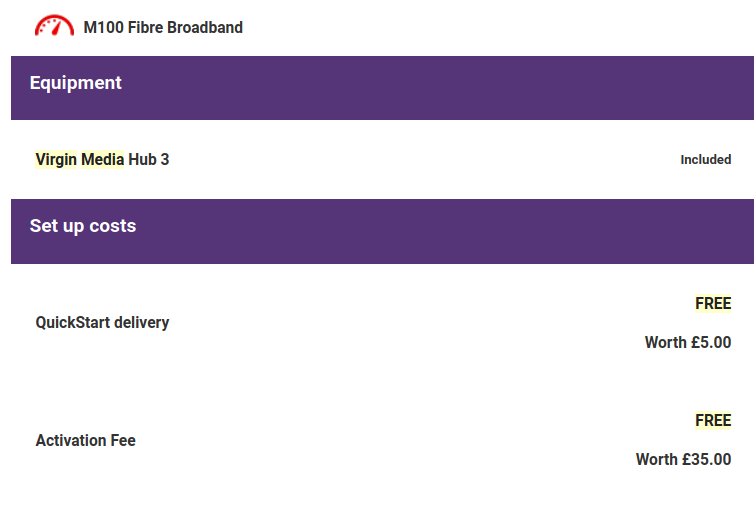 Week after I got an email saying that they were going to charge me an activation fee. I'm fine with that if only I knew about this charge before. Obviously the first thing is to contact them by phone.

A) After I spent 2 hours waiting on the phone I was told it's an error but only agents on the chat can help
B) After 40 mins waiting on the chat I've got a response "okay, please wait I'll forward your request to another agent". Agent never returned back to me, chat broke effectively. It was looping between "hello" and "rate our service". No way to reach for the agent
C) Another 1 hour on the phone and I've got an agent who basically called an idiot. "How come it's possible that there are no activation fee! To use internet you must pay that fee!" All attempts to explain that I have a proof sent from virginmedia.co.uk saying welcome with details just made her angry. 5 minutes of repeating the same thing and her - attacking me gave no result. I asked if I could forward the email I've got as a simple way to prove that I'm not making up things but the agent just reminded me again that it's impossible to use the internet without activation(oh boy..)
D) Soon I asked to talk to the manager and that's where the agent went nuts. "You will wait on the line for 5 hours, do YOU UNDERSTAND??!" - she threatened me.
E) 7 min After the manager picked up the phone, heard me again and apologized for the situation - because they all work from home they don't have access to the user accounts. 3 mins after she added credit to my balance to match installation fee

I asked agents when did I give my explicit consent to modify my network requests but they simply took this concern and carried on. No appologies, no actions, nothing.

It's all started with a simple issue - neither me nor my wife were able to work. It was impossible to access github via git. It's very unlikely that github is down so I tried to do the same thing via VPN, and guess what? It's working. That means only one thing - the traffic is being filtered, in simple words - your internet provider is deciding for you what you can access and what you can't.

You're having a chat with (supposedly) your friend asking questions and getting answers, can hear his voice. But then suddenly one of the questions doesn't have a response. You turn your head towards your friend and discover that there is a different person(proxy, man in the middle) who is expecting to receive some questions which are later passed on to the actual friend. But because some questions are not expected by proxy they are never answered

How does it work? Effectively Virgin Media implements DNS hijacking - technique widely used by hackers and "big brother"-type control systems. In simple words, the router configures the network in the way that your computer believes it takes to the target server you expect but in fact it talks to Virgin Media proxy.

Another quick check and I found that many people are complaining about that same thing. Easy and dirty fix to change local DNS servers to google or cloudflare

This is how VM is hijacking our requests to the internet:

Then, a number of calls with VM took place - in all of them agents made me feel not only welcomed but miserable. Very soon I learnt that they don't understand even basics of networking

A) After a lot of googling I found that VM has some sort of filtering enabled by default. And the way to disable it is via VM website
B) To access VM website user need to sign up
C) To sign up a new customer needs to put registration details from another VM account created during initial setup. When I fill up the registration information form and hit register button nothing happens. Same page reloaded again.
D) Another 40 mins of waiting on the call and agents explained to me that I need to wait for some email which normally comes right after activation. I explained that I already have that email and information from there didn't work. As usual, in a very rude manner I was told that I have to wait for another lucky email. And agents was so nice that he speeded up process so I'll get in 1 hour. Also, he said he can't turn off filtering because, well, he can't do it from their side.
E) 48 hours after, I didn't receive any email, of course. Another 1.5h wait on the phone and again I was told that I need to sign up on the registration page. That time I was switched to UK-based support and that agent was first he didn't talk to me as I'm a piece of sh3te. This time I was heard - the agent tried to sign up on my behalf and obviously it failed. She filed a bug to the web team.
F) Surprisingly, the agent was able to turn off filtering on their side. Probably some agents have super power, others just lazy.

BecauseI have no confidence in Virgin Media I setup secure PI-Hole with DoH(DNS-over-HTTPS), that helpes to hide remaning plaintext traffic from Internet provider you can't trust.

The most frustrating thing

We all know there are many shit companies out there. But I have very special expectations from the Virgin brand

During my 2nd Masters we had 2 books we prayed on - "Lean Startup" and "Like a Virgin: Secrets They Won't Teach You at Business School"

Last one taught us about the importance of customer satisfaction, putting customer needs and building processes around that and all stuff. In the Uni none of us ever used services from Virgin brand back in my home country. Well, now I did, and my experience is not as it was described in that book by Branson

PS: I do understand that VM is owned by another corporation but you know, they still carry the brand.